Seizures due to Meningitis in Hydrocephalic Child with History of Myelomeningocele

Meningtis or inflammation of meninges may be due to bacteria, virus or fungi. It mostly occurs in the first 2 years of life due to low immunity and high vascularity of the brain. Diagnosing meningitis is a straight forward lumbar puncture procedure, but in this case the patient suffered from hydrocephalus due to Arnold chiari type 2 malformation and had a history of myelomeningocele. This report discusses the procedure of diagnosis and treatment in this case.
Key Words: Hydrocephalus, Meningitis, Myelomeningocele, Seizures

Seizures refer to abnormal electrical activity in the brain which may be caused by a number of factors such as trauma (which include cerebral contusion), stroke, congenital anomalies, birth injury, degenerative cerebral disease, hydrocephalus, infections like meningitis , brain abscess, encephalitis, tuberculosis, and metabolic disorders such as hypercalcemia, hypoglycemia, hyponatremia and toxins.
Most frequently, children who have fever and seizures are suspected of meningitis, as the convulsion may represent the sole manifestation of bacterial meningitis. Clinical presentations of 503 consecutive cases of pediatric meningitis were studied to determine what proportion of the patient population had seizures as the sole manifestation of meningitis. No cases of occult bacterial meningitis were found.1 Thus febrile seizures solely are a rare manifestation. 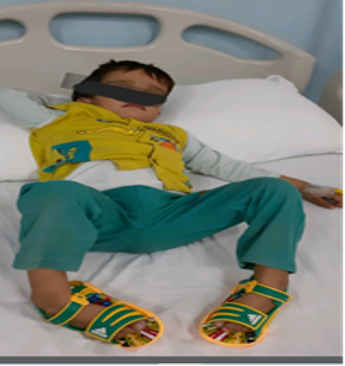 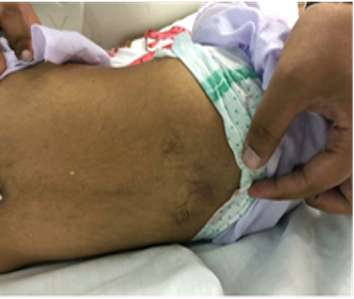 On CNS examination sunset sign was positive, anterior fontalle was 0.5 cm palpable, neck stiffness was seen but Kernig’s and Brudzinski’s signs were absent. Hypotonia of both lower limbs was observed with no sensation in feet up to the calf. Knee, ankle and planter reflexes were bilaterally absent. No significant cardiovascular or respiratory findings were found.
Anthropometric measures indicated weight 13 kg at 10th centile, height 94 cm at 10 centile (Figure 3) and Head circumference 56 cm above 97th centile.

Meningitis is defined as inflammation of the membranes that surround the brain and spinal cord.2 The swelling typically triggers symptoms such as headache, fever and a stiff neck and may progress to seizures and lethargy. It can be caused by bacteria, viruses or fungi. Children exhibit seizures in acute meningitis. According to a study published in the New England Journal of Medicine, seizures occurred in 58 patients (31% percent) during the acute phase of bacterial meningitis. In 39 patients, the seizures were clearly partial, generalized with focal predominance, or partial with secondary generalization3.
Bacterial meningitis starts as an infection of the upper respiratory tract, followed by invasion of the blood from the respiratory focus, seeding of the meninges by the blood-borne organism and lastly, inflammation of the meninges and brain. Early diagnosis is important as a child can suffer severe neurological deficits.
Lumbar puncture is the investigation of choice in ruling out meningitis but there are certain instances when it is contraindicated such as in case of increased intracranial pressure 4. Thus, our diagnosis was based on clinical findings.9.
Repeated meningitis is observed in patients of meningomyelocele, which is a neural tube defect. Myelomeningocele closure when delayed, by more than one day after birth, is associated with an increased rate of infection5.
Treatment with I/V Ceftriaxone is very effective for the treatment of meningitis, as Ceftriaxone enters the cerebrospinal fluid. The average bactericidal activity of ceftriaxone in CSF, 1 hour after a dose is at least 60 times greater than that of ampicillin or chloramphenicol6.

The patient was diagnosed with meningitis on clinical grounds and CT scan findings. Lumbar puncture was not performed due to Hydrocephalus caused by Arnold Chiari malformation type 2, as this would have been life threatening for the patient. The late closure of myelomeningocele is a suspected risk in development of meningitis. The patient also suffered from urinary tract infection that made him susceptible to meningitis due to poor blood-brain barrier. Patient was treated with a 14-day intravenous infusion of Ceftriaxone and was discharged on recovery.